Mapping the Metrics of Mapping: Putting Africa on the Map 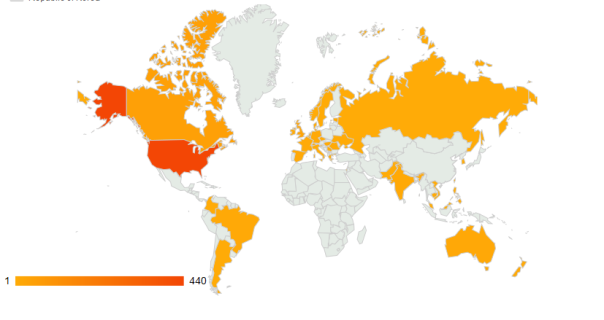 One of the things that I like about the WordPress platform is the statistics that it provides for me to see who is reading my blog.  I love stats: if you can measure it, then you can make it better.

Kind of like I like our ISO certifications at Williams & Heintz Map Corp. The processes make us keep track and measure everything:

Anyway, about the WordPress stats, I can be pretty obsessive. I am pleased to see that WordPress now has a view by country panel.  The best thing about this view is that it is in the form of a map! So far the MapPrinter blog has been viewed by people from 40 different countries.  No views from Africa or China yet.  How can I fix these big holes in my map?

UPDATE:  One week after posting about Africa, tagging and using Africa in the title of the post, I now have views from 5 countries in Africa:  Egypt, Ethiopia, Morocco, South Africa and Uganda!  I even received a request for a map printing quote 🙂

In honor of International Women’s day my post today is about an important woman in map printing history.  In fact Marie Tharp (1920-2006) is an important contributor to the studies of, cartography, geography, and oceanography, woman or man.

“Tharp was the first to map the unseen topography of the ocean floor on a global scale. Her observations became crucial to the eventual acceptance of the theories of plate tectonics and continental drift in the earth sciences. Working with pens, ink and rulers, Tharp drew the underwater details, longitude degree by latitude degree, described by thousands of sonar readings taken by Columbia University researchers and others. Her maps have since become modern scientific and popular icons.” http://www.columbia.edu/cu/news/06/08/tharp.html

Marie Tharp worked with Bruce Heezen at the Lamont- Doherty Earth Observatory.  They were the co-creators of the first global map of the ocean floor and co-discoverer of the central rift valley that runs through the Mid-Atlantic Ridge.

“As details of the ocean floor emerged, Tharp noticed a fascinating feature. A well-known mountain range running down the Atlantic, known as the Mid-Atlantic Ridge, appeared as expected. But as Tharp’s careful drafting made clear, there was also a valley that ran down through the middle of the mountain range. It was a hugely important geophysical feature; this “rift valley” marked a dynamic seam in the crust of the planet, the boundary of huge continent-size plates where new portions of crust rose from the interior of the earth to the surface like a conveyor belt and then, in a geological creep known as “drift,” moved outward in both directions from the midocean ridge.

The idea that vast tracts of the earth’s crust moved across the surface, known as continental drift, was unpopular at the time. Most geophysicists were “fixists” who believed the planet’s surface was static, and Tharp later remarked that a scientist could be fired for being a “drifter” in the 1950s. But she was the first to see the signature of plate tectonics on the surface of the earth, and Heezen was the first of many scientists who rudely dismissed it. “Girl talk,” he said. “It cannot be. It looks too much like continental drift.” It took Tharp the better part of a year to convince him.” http://www.nytimes.com/2006/12/31/magazine/31Tharp.t.html?_r=2

Marie Tharp came to Williams and Heintz Map Corp. with her drawings.  From her camera copy, we made film negatives. From the film negatives we made the color separations for the land tint and the water tint. From these, we made printing plates.   The job printed in three colors.

Williams & Heintz Map Corp can still print your map using film, if you need it. We can still make edits to, proof, and print from film. The man-hours involved in updating a film job can be much less than the thousands of man-hours required digitizing a whole new map. We can even combine digital correction copy with film based layers.

UPDATE:  Read more about Marie Tharp in my book review of  Soundings:  The Story of the Remarkable Woman Who Mapped the Ocean Floor, by Hali Felt.